There are a handful of semiconductor-based spin systems that have been implemented to demonstrate various quantum information processes, but each system is unique and requires disparate methods for full control.  A generalized method to characterize and rapidly control potential qubit systems would facilitate the search and testing of new quantum systems as well as allow the combination of multiple systems using a single, universal protocol.
Using the negatively charged nitrogen-vacancy (NV) center in diamond as a model system, we introduce a characterization technique to probe the intrinsic structure of an optically active spin system and control its dynamics using ultrafast optical pulses.  Our scheme complements the all-optical NV-center spin control previously demonstrated Yale et. al., PNAS but allows for faster control using ultrafast resonant laser pulses (~637 nm), optically exciting the NV center with picosecond resolution.

Combining time-domain control of these fast excitation pulses with quantum state tomography of the NV-center ground-state spin, we are able to demonstrate arbitrary, all-optical, coherent control of spin rotation as well as develop a protocol to precisely map the coherent evolution of the excited state Hamiltonian.
We can also utilize the optical pulses to manipulate the NV center’s orbital state in much the same way that microwave pulses rotate the ground state spin.  The optical pulses only affect the orbital state directly, preserving the spin coherence.  By varying polarization of the optical field, we can couple the ground state to either excited state orbital branches, |L> or |U> or a superposition of the two (see below).  The |L> or |U> orbital branches are split by a few GHz due to the local strain. 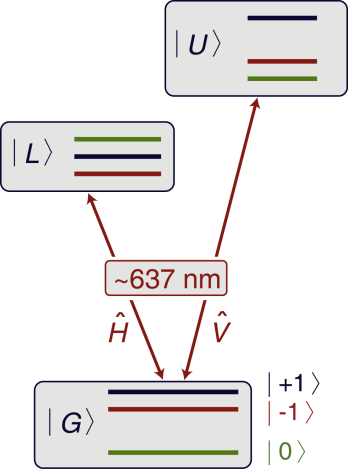 Using a home-built confocal microscope, we address individual NV centers with a 532 nm laser (for spatial imaging and stabilizing the local charge environment), a continuous-wave 637 nm laser (for resonant readout), and microwaves (for ground-state spin manipulation).  In addition, the key to this experiment is a frequency-doubled optical parametric oscillator pumped by a mode-locked Ti:sapphire laser which generates subpicosecond optical pulses. By selecting the power of the ultrafast optical pulse laser, we either fully populate the excited state for spin control, or populate a ground/excited superposition for studying orbital coherence. 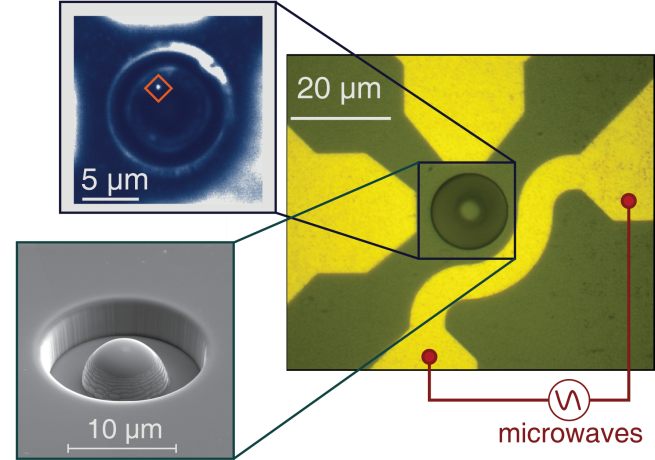 For the orbital coherence measurements, we excite the NV center into a superposition of the ground and excited state, wait a prescribed delay time τ using an optical delay line, and then re-illuminate the NV center with a second ultrafast optical pulse.  The polarization of the ultrafast pulses is selected to mix the |L> and |U> orbital branches. 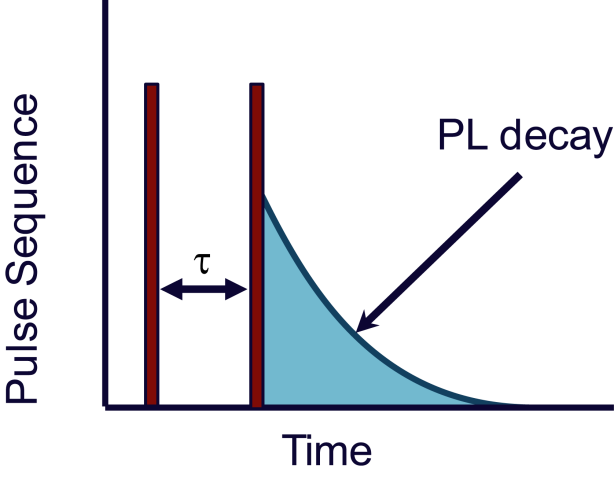 We collect the photoluminescence of the NV center after the second ultrafast pulse, from the red-shifted phonon side band (650 – 750 nm).  At each time delay, τ, we vary another mirror in the delay line on a piezoelectric stage to sweep through a short femtosecond delay, Δτ.  Examples of the collected PL is shown below 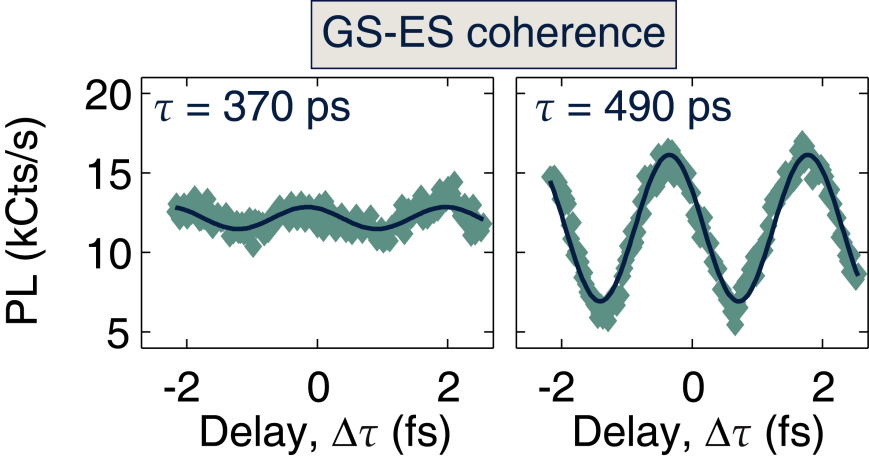 where the induced oscillations correspond to the NV center’s ground to excited state transition of 2 fs (470 THz).   Fitting these fast oscillations and extending the delay time to the picosecond regime, we see a beating in the overall amplitude (below) which corresponds to the separation (due to local strain) between the |L> and |U> orbital branches.

This beat frequency corresponds to the local strain around a given NV center and can be tuned using previously discussed techniques [Bassett et. al., PRL].  If we were to zoom out again to a longer nanosecond timescale (not shown), we begin to see an orbital dephasing mechanism on the overall amplitude, with a dephasing time of about 6 ns.

The ability to coherently manipulate the NV center’s orbital state on ultrafast timescales enables control of its electronic spin.  The ultrafast pulses can also serve as a gate to control the spin dynamics by coherently driving the system into different orbitals and abruptly changing the spin Hamiltonian.  By fixing the spin evolution time within the excited state manifold, we are able to produce controlled spin rotations without microwaves pulses. 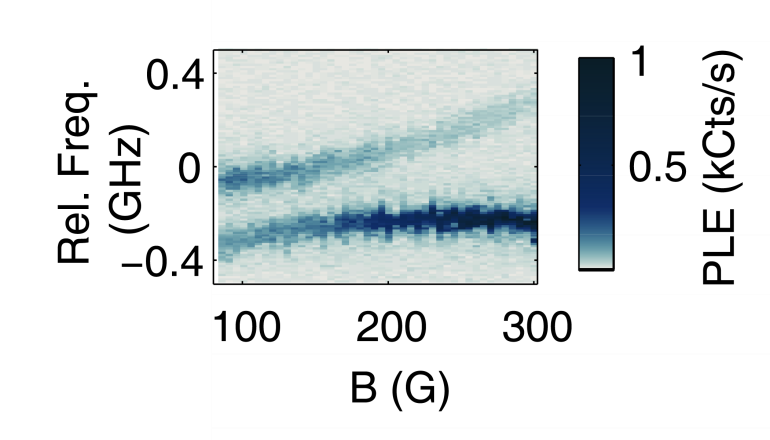 The trajectories in the lab-frame qubit Bloch sphere corresponding to the best-fit simulations to an analytical model of the TDQT measurements at different magnetic field values are shown below.  The yellow axis in each plot shows the orientation of the ES eigenvectors relative to the GS, and θES is indicated by dotted black lines.

Our all-optical technique could be used to address individual spins in a spin array or some other type of photonic network.  It would also be extended to multi-qubit entangling gates, similar to ultrafast gate proposals for trapped ions and superconducting qubits.  The TDQT technique could also be applied to a broad range of atomic, molecular and solid-state quantum systems, offering a unique tool to characterize and control both new and established systems.

To learn more about our studies, please refer to: