Commercial fluorescent diamond nanoparticles are a promising starting material as they are both inexpensive and scalable, but they typically contain inhomogeneous residual strain fields due their fabrication process that limits their direct application to quantum sensing.   Any inhomogeneous distribution of strain within these could nanodiamonds results in non-uniform NV center behavior, which broadens the overall ensemble linewidth, reduces signal, and ultimately decreases sensing ability.  High-temperature annealing can potentially improve NV center performance in commercial nanodiamonds via strain relaxation, however, the spatial distribution and evolution of internal lattice distortions responsible for these improvements have yet to be explored. Here we develop an x-ray imaging technique to look at the local strain within commercial nanodiamonds.

In this work, we use Bragg coherent x-ray diffraction imaging (BCDI), a nondestructive strain-sensitive x-ray microscopy technique, to measure 3D lattice distortion fields within individual commercial nanodiamonds during annealing.  BCDI is a hard (high energy) x-ray imaging technique that reconstructs a strain-sensitive 3D image of individual sub-micron-sized crystals. We conducted these BCDI experiments at the Advanced Photon Source at Argonne National Lab.  Where conventional x-ray techniques take an average of the sample crystallinity, BCDI uses the coherence properties of the APS synchrotron to image the strain in individual sub-micron particles with nanometer-scale spatial resolution, and picometer-scale sensitivity to lattice distortions.

The process is depicted schematically in the figure below. The measurement illuminates a nanocrystal with a coherent x-ray beam and collects the Bragg peaks with an x-ray area detector.  A series of coherent x-ray diffraction patterns about the Bragg peak are measured by rotating the sample in a series of fine angular steps with respect to the beam. The resulting coherent Bragg peak intensity distribution is inverted using sophisticated phase retrieval algorithms and the resulting real space image is proportional to the 111 component of the lattice displacement vector, effectively mapping lattice distortions.

We heated the nanodiamond samples to 800 C while periodically taking BCDI scans to observe changes in the strain fields due to annealing. We find that the crystal lattice distortion fields may improve, depending on the initial strain state. Upon annealing to 800°C, a diamond nanocrystal with a broader distribution of strain showed a homogenization of lattice structure as well as changes in morphology consistent with surface graphitization (confirmed with Raman measurements), whereas less-strained nanodiamonds did not change significantly in the temperature/time regime of this study. Based on these findings, we propose that thermal annealing up to 800°C was sufficient to activate graphitization and enable the “healing” of the lattice structure via vacancy annihilation only in highly strained volumes of material.

Below, we show selected Bragg coherent diffraction imaging reconstructions of a nanodiamond crystal shown at different stages of the annealing process. The shape of the nanodiamond reconstructions shown here are colored according to the near-surface displacement of (111) diamond lattice planes (u111).

The full-width-at-half-maximum (FWHM) values of the strain distributions measured within three different nanodiamonds as a function of temperature are shown (left, below) along with crystal volume (right, below). Crystal 1 initially contained a relatively higher level of strain that decreased during annealing to a level comparable with Crystals 2 and 3. Additionally, the volume of diamond crystal within Crystal 1 was found to decrease due to surface graphitization (as verified by ensemble Raman measurements).

Finally, the surface etching via graphitization likely contributes to the structural homogenization.  Below we show a cut through the center of crystal 1, comparing the initial state to the 750 °C annealed state.  The upper set of images shows the lattice distortion in u111 (pm) and the bottom images show the strain state, calculated as a spatial differential of the lattice displacement,  ∂u111/∂x111.  The black outline of the final morphology is superimposed onto the initial lattice pictures to illustrate the volume of the nanodiamond that was etched away.  We observe a decrease in magnitude of the lattice displacement and strain, especially in the regions of highly distorted crystals. 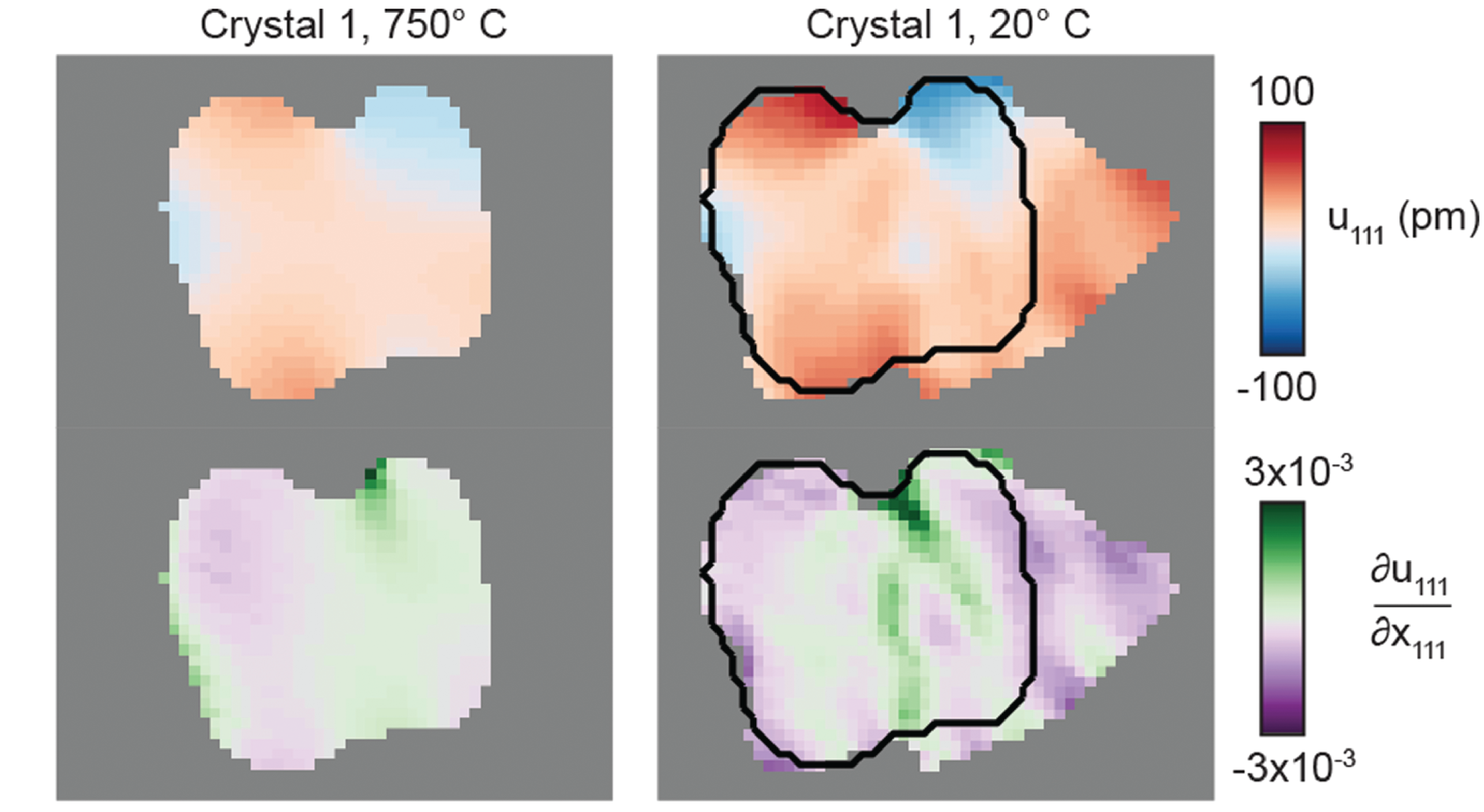 Discovering scalable methods of processing commercial nanodiamonds with internal strain reduced to levels suitable for NV sensing applications is critical for the transfer of NV technologies towards large-scale applications. This work is an initial step in this direction and this approach can be further applied to other promising nanoscale quantum sensing materials such as SiC nanoparticles.

Details can be found in our manuscript: