The ability to fully understand the spin dynamics of nitrogen-vacancy (N-V) centers requires an understanding of its environment. In single-crystal type Ib diamond this environment is dominated by substitutional nitrogen defects (P1 centers) as shown below on the left. These nitrogen atoms are optically excited by energies similar to those used to pump the N-V centers. Therefore it is important to understand the photoconduction due to these substitutional nitrogen atoms and how they relate to the single-spin systems they surround. 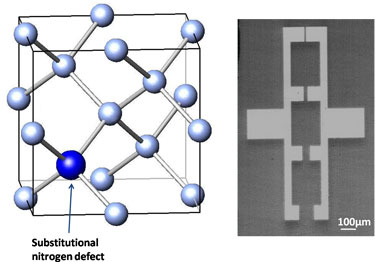 We investigate these photoexcited currents (photocurrents) by depositing gates on single-crystal type Ib diamond as shown above on the right, and illuminating specific regions of interest. Diamond is normally an insulator, allowing for the optically bridged gaps to be electrically isolated from one another. The current-voltage (I-V) curve, shown below and to the left, shows a hysteretic behavior dependent on the voltage scanning rate. This suggests the photocurrent is mitigated by a space-charge distribution across the gap and therefore implies that there is charge being stored within the gap. Below and to the right is a graph of the photocurrent as a function of the illumination focus. The focus has a geometrical dependence on the gap width, revealing that the photoconduction is maximal when the laser first bridges each gap.

We are able to further probe the amount of charge being stored within the gap by controlling the timing of both the voltage across the gap and the illumination bridging the gap. Below and to the top is an example of a typical timing sequence. Initially both the optical excitation and applied voltage are on. The laser is then blocked, followed by the removal of the voltage. We then vary a certain amount of “dark time”, after which the laser is unblocked and the discharge photocurrent is measured. The resulting transient photocurrent follows a stretched exponential function, shown below in the lower left. This function describes a defect state within the band-gap of the diamond. Integrating the transient discharge photocurrent reveals the amount of charge stored within the gap for a given dark time, shown below in the lower right. The charge stored also fits to a stretched exponential function with a characteristic lifetime of ~3 hours. 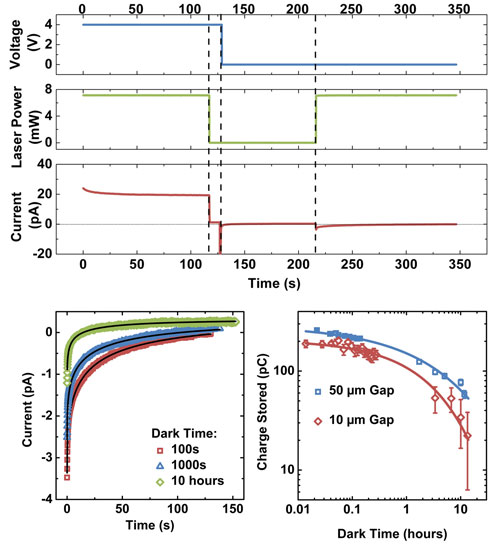 Further investigation of the excitation energy dependence reveals a turn-on in the photocurrent around 1.9eV. Below and to the upper left is a graph of the high voltage I-V curve. Linearly fitting this curve shows an increased slope, or differential photoconductance, as the illumination energy increases beyond 1.9eV. Below and to the upper right is a graph showing the fitted differential conductance as a function of excitation energy. The observed turn-on at 1.9eV is likely cause by substitutional nitrogen (P1 center) defect trap state, the dominant defect in type Ib diamond. Below on the bottom is a diagram of what is likely occurring. Electrons are photoexcited out of these 1.9eV nitrogen defect trap states and the move along the electric field according to a trapping/retrapping mechanism, which results in the measured photocurrent. 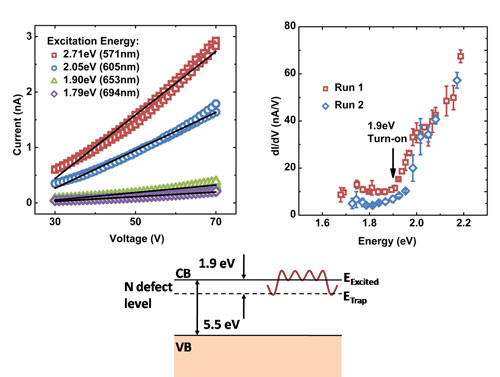 Generation and transport of photoexcited electrons in single-crystal diamond