The interaction of spin waves (SW) and nitrogen vacancy (NV) centers in diamond can be used to enhance the defects’ sensitivity: it has been recently proposed that SWs excited in ferromagnetic materials can act as a mediator of magnetic interactions and improve the sensing properties of the NV centers.  In the presence of a strong SW-NV center interaction the SWs can also be used to mediate the coupling between separate NV centers. Demonstrating these effects is also of great importance for the advancement of nanoscale MRI and scalable quantum computing platforms based on solid state defects.

In this experiment, we pattern 5 µm wide Ti/Au (10/200 nm) microstrip lines (MSLs) on a YIG thin film (3.08 µm thick). We use the MSLs to generate the microwave signals used to both directly control the NV centers and also to excite spin-waves in the ferromagnetic layer. Pairs of parallel MSLs are fabricated to perform microwave transmission measurements to characterize the spin-wave spectrum of the system (see figure below).  Diamond nanoparticles containing NV centers are fabricated into an ordered array and embedded on the surface of a transparent and flexible layer of polydimethylsiloxane (PDMS). This system allows us to precisely control the nanodiamond’s position and the flexibility of the PDMS ensures a good contact between the nanoparticles and the YIG layer. 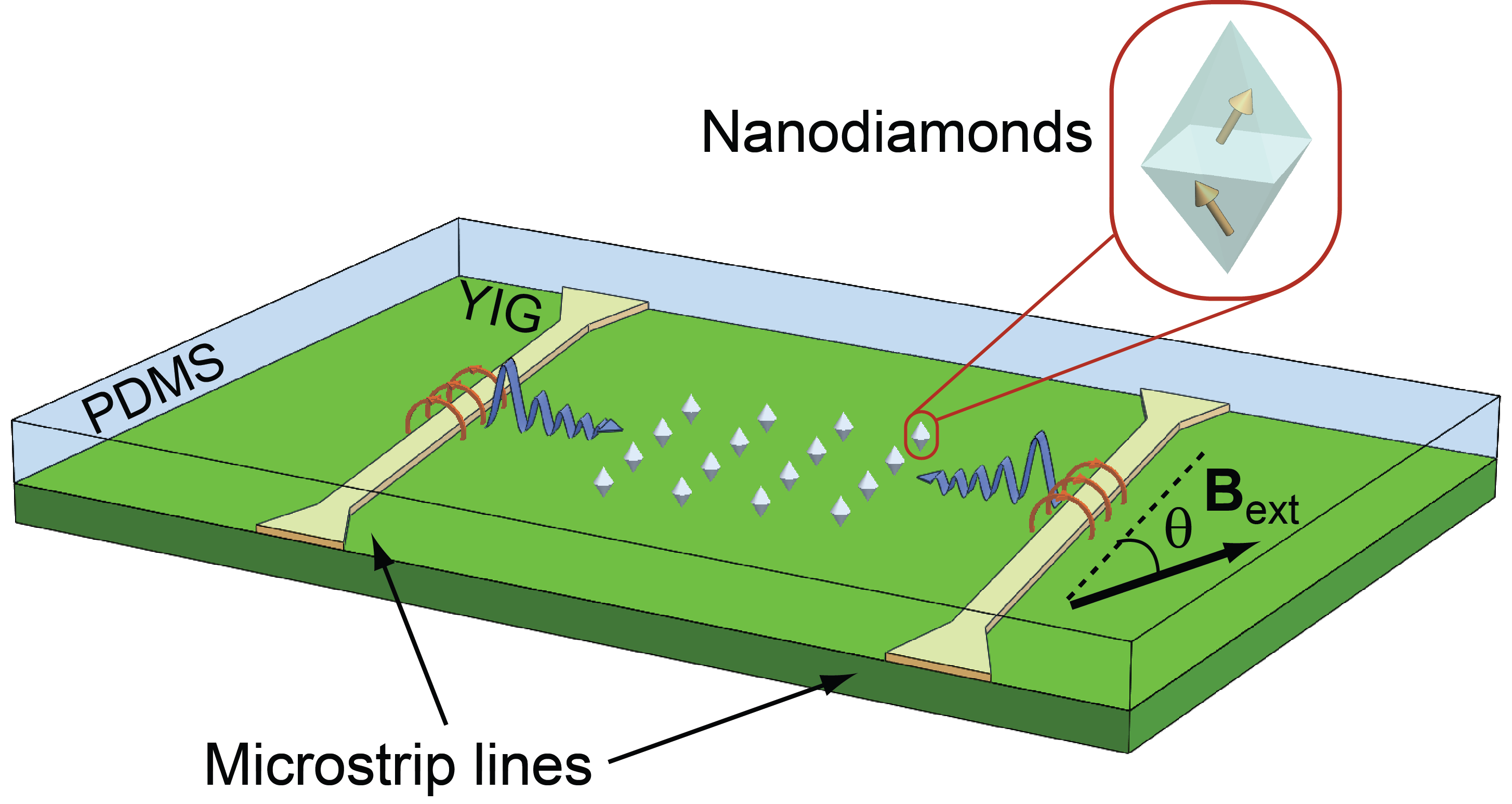 Different orientations of the external magnetic field are associated with the excitation of SW modes with different properties. In our initial measurements we selected the field to be parallel to the MSLs. In this condition surface spin-waves are excited in the YIG layer and we believe that the confinement of the magnetization oscillations at the surface could produce the strongest interactions with the NV centers.

As we decrease the applied microwave power normally needed to drive NV centers by three orders of magnitude and we show that typical NV center’s resonances are visible but only at high magnetic fields parallel to the MSLs (see figure below).  This suggestes the presence of a highly efficient spin-wave mediated resonant driving that could be used to mediate magnetic interactions between separate NV centers or between an NV center and a spin external to the diamond lattice. 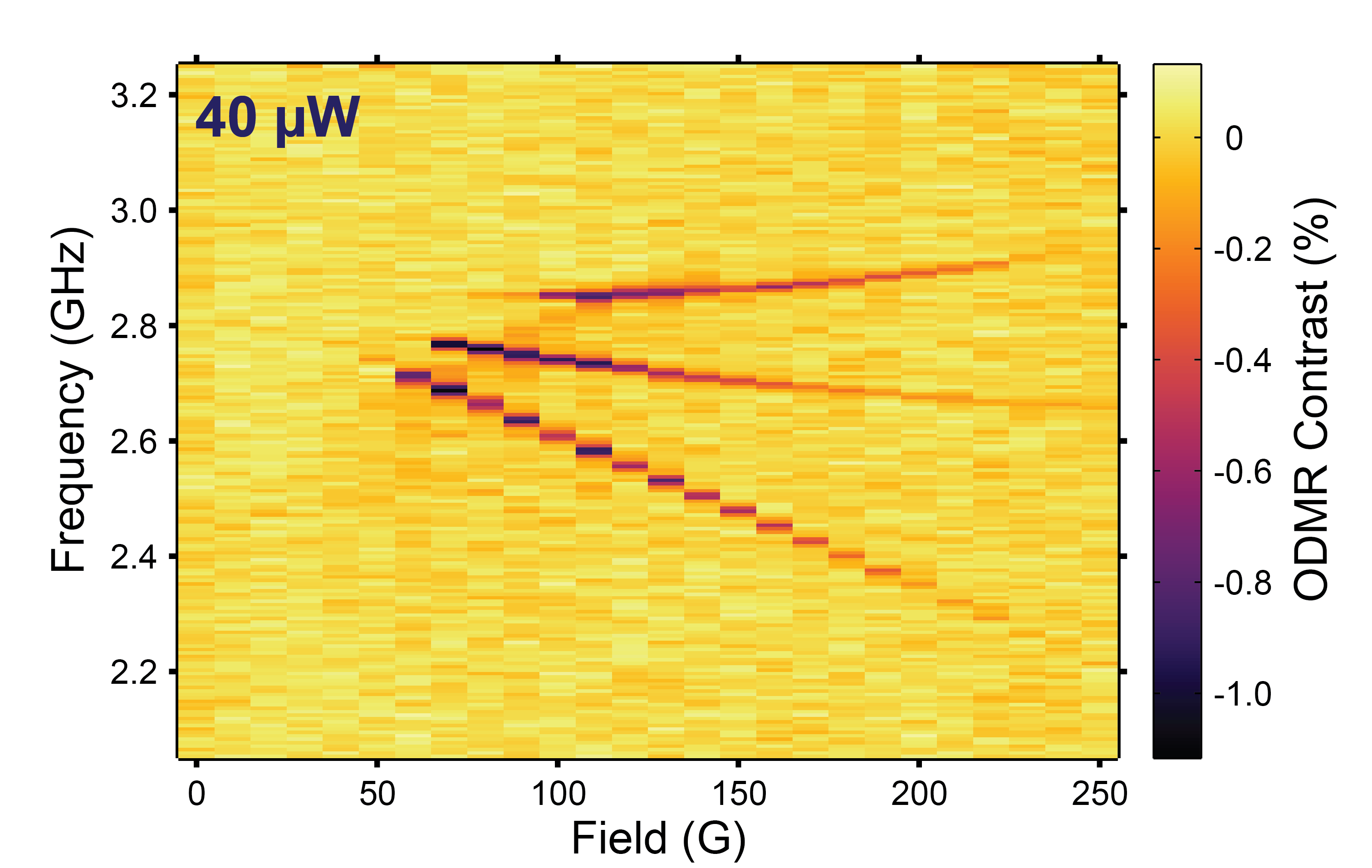 We also demonstrate the coherent nature of the strong surface SW-NV center interaction, which is crucial to use this effect for quantum sensing and quantum information processing applications.  In order to do this we use the condition of magnetic field parallel to the MSL and perform time-dependent measurements.  Below on the left, we show a series of Rabi curves collected on the same diamond nanoparticle in the presence of 120 gauss and using different microwave powers (all in the SW driving regime). This data demonstrates that we can induce SW mediated coherent oscillations of the NV centers. Furthermore the dependence on the MW power of the Rabi frequency follows the conventional expected dependence, indicating that at these power levels nonlinear magnonic effects are not relevant. We observe a progressively faster decay of the Rabi oscillations at increasing powers that we attribute to the decrease in the NV centers’ coherences associated with higher magnetic noise.

Additionally we want to better quantify the effect of the SW mediated MW field enhancement.  To do this we want to compare the Rabi frequency that we can achieve at low magnetic fields driving the NV centers directly with the MW field generated by the MSL and at high magnetic field in the SW driving regime (see figure below, right). To obtain the most accurate estimate we collect these measurements on a particle containing NV centers that are considerably misaligned with respect to the external magnetic field. For a NV center in this condition, the lower branch of the spin ground state resonances can assume the same frequency at low and high field (see simulated spectrum for an NV at 78 degrees with respect to the external field). We are then able to measure Rabi oscillations in the Antenna Driving and in the Spin Wave Driving regime using the same MW frequency, thereby eliminating any effect due to variations in the microwave transmission. Specifically, when the ND is situated 20 µm away from the antenna we observe a SW meditated 100-fold enhancement over direct MW antenna driving.

Importantly, this enhancement is dependent on the distance from the MW source and the ND because while the antenna field decays linearly with the distance from the source, we can assume that the MW generated by the SWs is constant on distances that are small compared to the attenuation length for the SWs (of the order of hundreds of micrometers).  We also observe that this spin-wave mediated driving has no detrimental effect on the spin coherence properties of the NV centers within these nanoparticles (see below). 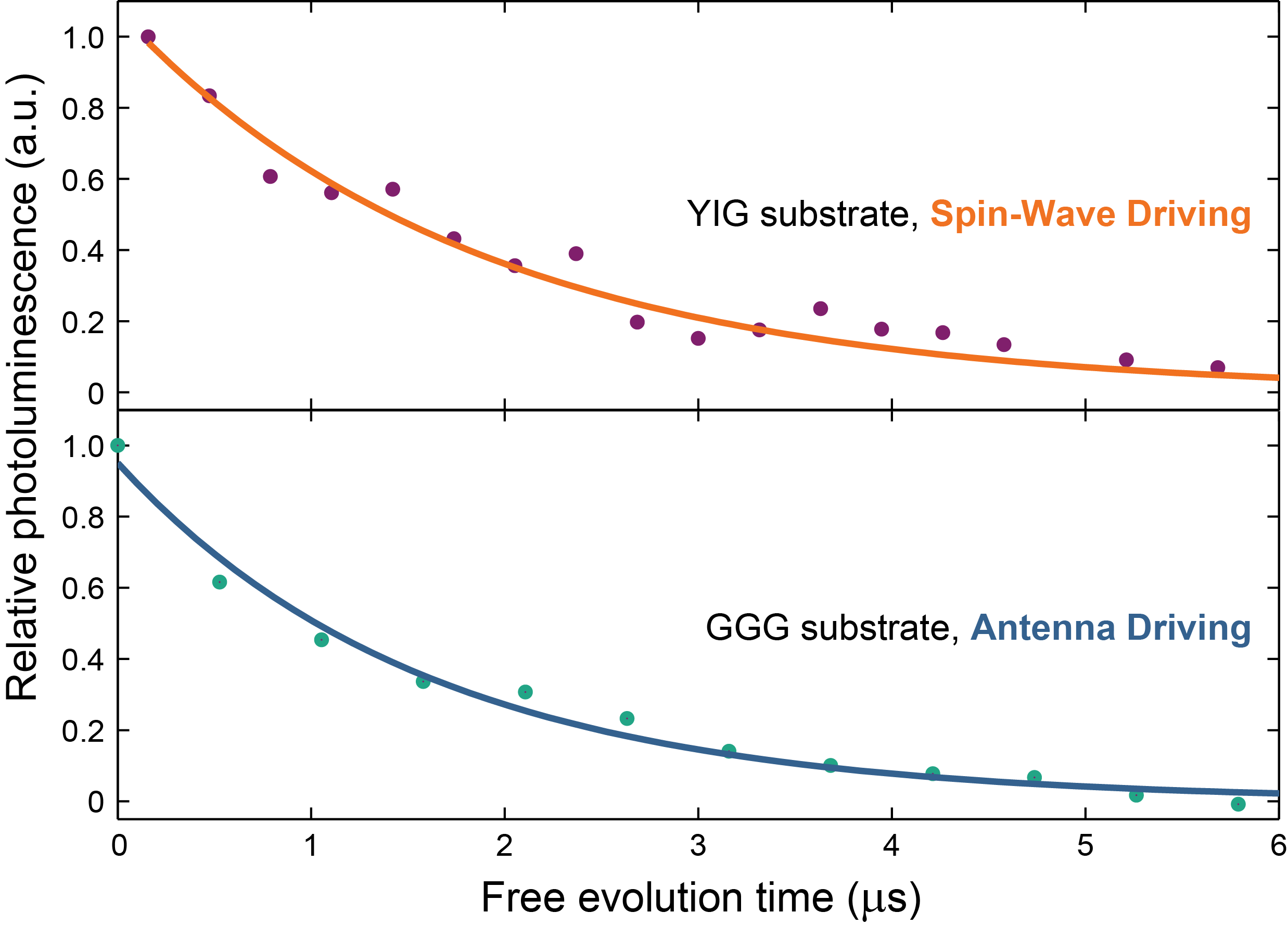 To summarize, we investigated the effects of the interactions between NV centers and SW excited in a ferromagnetic material.  We demonstrated that the considerable quenching of the NV centers PL when we excite surface spin waves in the YIG layer is associated with a strong interaction between the SWs and the NV centers which originates from the surface confinements of the magnetization oscillations.  This interaction can be used to obtain resonant long-range SW mediated driving of NV centers, and the driving field delivered by the SWs is two orders of magnitude more efficient compared to those driven by the antenna field.  Spin waves can be used to obtain full coherent control of the NV centers, which is crucial to extend this effect towards enhancing the sensitivity of the NV centers or to use it in quantum information processing schemes.

Details can be found in our manuscript: