The ability to study single N-V centers at room temperature with our home-built microscope setup allows us to uncover several interesting phenomena by optically probing a single spin system.

When applying a magnetic field at small angles to the symmetry axis of the N-V center and varying the field intensity, two negative peaks are observed in the PL (shown below) The peak near 1000G is due to the anti-crossing of ground state spin sublevels and has been previously observed. The peak near 500G was not seen in previous work and is attributed to an anti-crossing of excited state sublevels.

The concept of a level anti-crossing is depicted in the figure below. A weak interaction between two states, whose energies are expected to cross at a certain magnetic field B, leads to the formation of two states that do not cross.

As seen in the figure above, as the angle of the applied magnetic field gets closer to the symmetry axis of the N-V, the 500G level peak is seen to disappear, while the 1000G peaks narrows for the particular N-V center shown here.

This behavior can be understood by assuming anisotropic spin relaxation and a simple model based on that assumption is used to the fit the 1000G peak data. In the figure below, we show data for the 1000G peak on two different N-V centers and the fits show good agreement with the data.

In the angular regime where the 500G peak is very weak (< 1°), magnetic dipole coupling to the 'dark' spins of nitrogen defects in the immediate vicinity, schematically shown in the figure on the left, is unmasked. The electronic spins of the nitrogen defects are called 'dark', since they are not otherwise detected by luminescence. 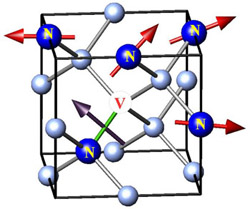 The negative peaks due to this magnetic dipole coupling show are characteristic of the hyperfine interaction of the electronic and nuclear spin of the nitrogen defect (see figure above).

This dark-spin spectroscopy is in principle also applicable to other paramagnetic defects in diamond and it shows that it is possible to probe small number of dark spins by means of a single bright spin under ambient conditions.