One of the major challenges in spin-based solid state quantum information processing is initializing single spins and coupling them to each other to exchange information. To explore these issues, we here investigate the strong coupling of a single N-V center to a single nitrogen spin, which is schematically shown in the figure below. The purple arrow symbolizes the N-V center spin, while the red arrow indicates the single N spin. 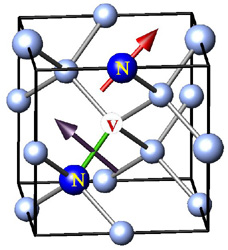 The ground state spin sublevels of the N-V center and of the N electron are shown vs. the strength of a magnetic field applied along its symmetry axis in panel (a). The N-V spin gets polarized by optical excitation, which can be transferred to the N spin via the magnetic dipole interaction, the dynamics of which are shown in panel (d). The magnetic dipole interaction between the two spins is highly dependent on the angle between them, as shown in (c). A closer look at the resonances between N-V and N spins also shows the hyperfine coupling of the N electron and nucleus in the photoluminescence (PL) in (e). The corresponding energy levels are shown vs. the magnetic field in (b). 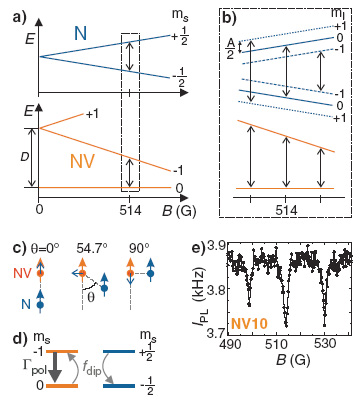 Using optically detected electron spin resonance (ESR) to probe the coupling between the N-V center spin and N center spin, we see that the ground state ESR line of the N-V center is split into a doublet, shown on the right for two different centers in (a) and (b). This is due to the dipolar coupling to the electron spin of a single N nearby. As the applied magnetic field strength is swept, one can see that one of the resonances disappears due to the N spin getting polarized. Depending on the position of this single N spin with respect to the N-V center, the coupling can be ferromagnetic or antiferromagnetic, i.e. the N spin gets polarized to a different state (+1/2 or -1/2), as shown in (c) and (d). 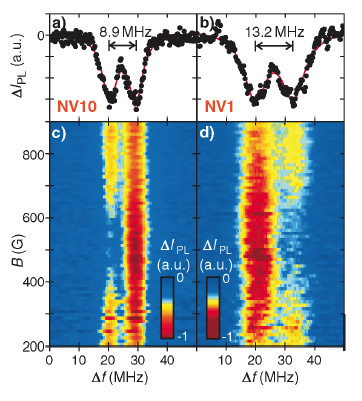 As shown below, the depth of the resonance also depends on the power of the excitation laser. The more highly polarized the N-V spin, the more highly the N spin gets polarized (panel (a)). We determine the degree of polarization of the N spin by comparing the depth of the resonance dips of the ESR doublet, which correspond to the different spin states of the N electron. As shown in (b), we see a degree of polarization exceeding 70% for the single N spin.

By using pulsed optical excitation and detection, we can also determine the spin relaxation time for the N spin. The pulse scheme is shown in (a) below. The magnetic field is set to the resonance that will allow for N spin polarization. The 'pump' laser pulse polarizes the N spin, then the laser is turned off for a variable 'wait' time and then another short 'readout' laser pulse is applied to read out the degree of N spin polarization via the photoluminescence as discussed above. The spin relaxation time T1 that we extract for this single N spin is 75 ± 20 μs.

These results reveal the possibility of optically studying and controlling a system of two coupled single spins in the solid state at room temperature. Down the road, coherent control over the dynamics of such a system may provide opportunities in quantum information processing.