The nitrogen-vacancy (NV) center in diamond has emerged as a leading quantum bit candidate for room-temperature quantum information processing and as a powerful solid state quantum probe of electromagnetic fields, temperature, and strain. As a sensor, it is advantageous and desirable to be able to position the NV center in space in order to record electromagnetic or temperature information in a complex three-dimensional setting such as within a living biological cell or near a surface. Using a single-beam optical tweezers apparatus (see Figure 1), we demonstrate three-dimensional control of nanoscaled diamonds—nanodiamonds—in a liquid with simultaneous readout of ground-state electron-spin resonance (ESR) transitions in an ensemble of diamond nitrogen-vacancy color centers. We then use the measurement of ESR spectra and an analysis of the associated magnetic field dependence to infer a d.c. magnetic field sensitivity of approximately 50 μT/Hz1/2.

FIGURE 1: Optical trapping apparatus. (Left) A schematic of the optical trapping apparatus near the trapping region. A microscope objective focuses an infrared trapping laser and a second confocal (green) excitation laser is used to generate transitions in the NV center. An on-chip microwave antenna situated near the trap focus produces resonant microwave fields to drive transitions between the ground-state spin sublevels of the NV center, while an electromagnet is used to shift the energies of these sublevels. (Right) An optical image of the apparatus near the trapping region. Microfluidics deliver an aqueous solution of nanodiamonds to the focus of the lasers for trapping and excitation, while the on-chip antenna produces the microwave fields used in electron spin resonance measurements.

The apparatus achieves trapping and three-dimensional spatial control of nanodiamonds by using a single focused laser beam and a piezo stage. Dielectric particles, such as diamond, are attracted by the laser to its region of highest intensity, near the focus. Once the particles are trapped, an XYZ piezo stage moves them relative to the surrounding environment. Figure 2 shows a visual demonstration of trapping and XYZ control.

While the particles remain trapped, we induce optical transitions in the NV center by illumination with a focused green laser, which results in the emission of red and infrared photons from the NV center. This NV center photoluminescence, IPL, is then collected through the same microscope objective used to focus the trapping and excitation lasers. Furthermore, IPL possesses a spin dependence that results in the groundstate ms = 0 state being brighter than both the ms = +1 and ms = −1 spin states. This spin-dependent photoluminescence facilitates optically detected ESR, in which a resonant microwave field drives transitions to the dimmer ms = ± 1. Figure 3 shows IPL and the ESR contrast, ΔIPL, as a function of time for nanodiamonds that are trapped and free to move around the liquid.

The magnetic field dependence of the ESR spectra of trapped nanodiamonds is similar to that observed in bulk diamond. That is, a single zero-field resonance peak centered at 2.87 GHz, in the presence of an applied magnetic field, becomes two distinct Zeeman-shifted peaks whose frequency separation grows in proportion to the field strength. This ESR magnetic field dependence of trapped nanodiamonds is shown in Figure 4. However, key differences between ESR spectra observed in bulk diamond and our optically trapped nanodiamonds are, in the case of trapped nanodiamonds, the absence of multiple peaks corresponding to distinct NV center physical orientations, ESR linewidth broadening, and a ESR peak magnetic field frequency shift consistently less than the maximum value of 2.8 MHz/G. These differences can be understood by accounting for the random motion of NV centers in the trap and incorporating the orientation-dependent absorption and luminescence collection efficiency in the expected ESR lineshape; data fits obtained by modelling the system in this way are shown in Figure 4 and are in excellent agreement with the measurements.

FIGURE 2: Video capture sequence of the trap after it is turned on (arrow indicates location trapped nanodiamonds, which appear as an elliptical spot in the image), moved out of the plane (in the Z direction), moved in the plane (XY direction) toward the edge of the microwave antenna (black feature in the left side of image), and turned off releasing the nanodiamonds. The nanodiamonds can thus be moved in three dimensions with nanometer precision. 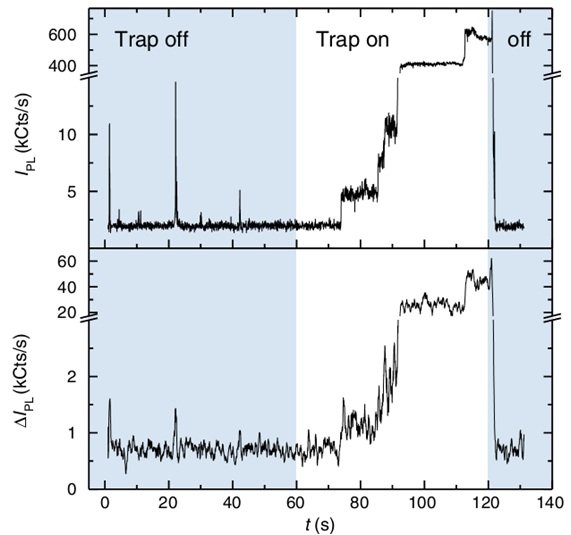 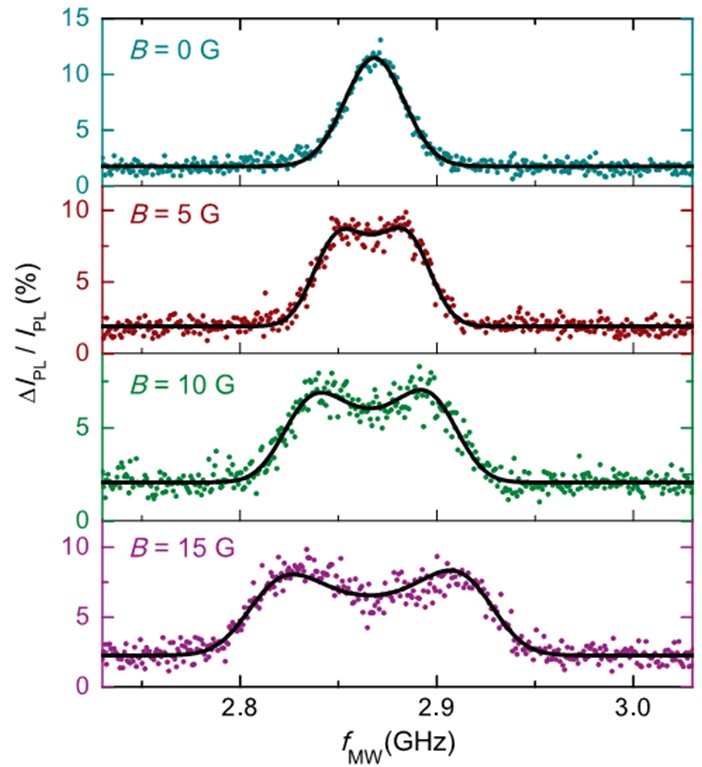 FIGURE 4: Magnetic field dependence of electron spin resonace (ESR) spectra. At zero magnetic field the ESR spectra show a single resonance near 2.87 GHz. However, at non-zero magnetic field (aligned with the principle axis of the microscope objective) two distint resonances appear due to Zeeman splitting of the ms = +1 and ms = −1 spin states.