Thermometry based on thermally driven changes in fluorescence lifetimes or intensities are essential techniques in many environments that preclude electrical probes. Although typical fluorescence thermometers are employed in industrial settings and utilize millimeter-scale optical devices, in recent years there have been significant research efforts to develop analogous methods at the nanoscale. These efforts are motivated by potential applications such as intracellular thermometry and scanning thermal microscopy and have stimulated the development of fluorescence thermometers based on a variety of solid state and polymer nanostructures. Despite this intense research, however, there is a clear need for more advanced nanoscale fluorescence thermometers as the application of current technologies is hampered by poor temperature resolution (~0.5 K), poor optical stability, or difficulties with calibrating the probe fluorescence.

In recent years solid-state electronic spins have gained considerable attention for applications in nanoscale sensing. In particular, the diamond nitrogen-vacancy (NV) center has garnered attention for its optical spin initialization and fluorescence-based spin readout, the ability to isolate and measure single defects, and the ability to manipulate its spin using microwave electron spin resonance techniques. NV center sensing is based on monitoring shifts in the spin resonance frequencies through the defect's fluorescence as a function of external perturbations such as magnetic fields, electric fields, or temperature, with the sensitivity of these techniques scaling as the inverse square root of TC , where TC is the relevant spin coherence time. For DC sensing applications these coherence times are limited to a few microseconds in typical materials due to slow fluctuations in the NV center's nuclear spin environment. However, in AC sensing applications these coherence times can be enhanced by 2-3 orders through the use of dynamical decoupling techniques that periodically invert the spin state and the signal being sensed in order to mitigate the effects of low-frequency magnetic noise.

Our recent experiments demonstrate that the quantum coherence of a single NV center can enhance thermometry. Our techniques rely on the use of dynamical decoupling protocols that manipulate the NV center's spin-one ground state to maintain DC sensitivity to thermally driven shifts in the spin resonance frequencies while suppressing the effects of low frequency magnetic noise. This allows us to exploit the NV center's long spin coherence for thermometry. We enhance the spin coherence times for thermal sensing from ~2 μs to over 80 μs, resulting in inferred thermal sensitivities of 25 mK Hz -1/2 (see Figure 1). By combining these prolonged coherence times with microfabricated photonic devices to improve the photon collection efficiency, we estimate that thermal sensitivities better than 10 mK Hz-1/2 should be achievable. Moreover, we demonstrate the versatility of these techniques by showing that they can be applied over a broad temperature range (see Figure 2) and in both finite and near-zero magnetic field environments.

While these results are obtained using single NV centers in high-quality synthetic diamond, recent advances in processing diamond nanostructures containing highly coherent NV centers suggests a pathway for creating nanodiamonds that achieve similar thermal sensitivities. Such nanostructures could enable high precision thermometry in biological and microfluidic systems with sub-diffraction spatial resolution defined by the nanodiamond volume. Furthermore, scanning thermal measurement in fluids will benefit from recent advances in the three-dimensional spatial control and orientation control of optically trapped nanodiamonds containing NV centers. Finally, the robust temperature dependence of these spin-based thermometry methods suggests they could also be applied in applications such as diamond-based scanning thermal microscopy. These compelling applications suggest the potential impact of nanoscale thermometers that combine the solid-state quantum coherence of NV centers demonstrated in this work with the biocompatibility, hardness, and high thermal conductivity of diamond. 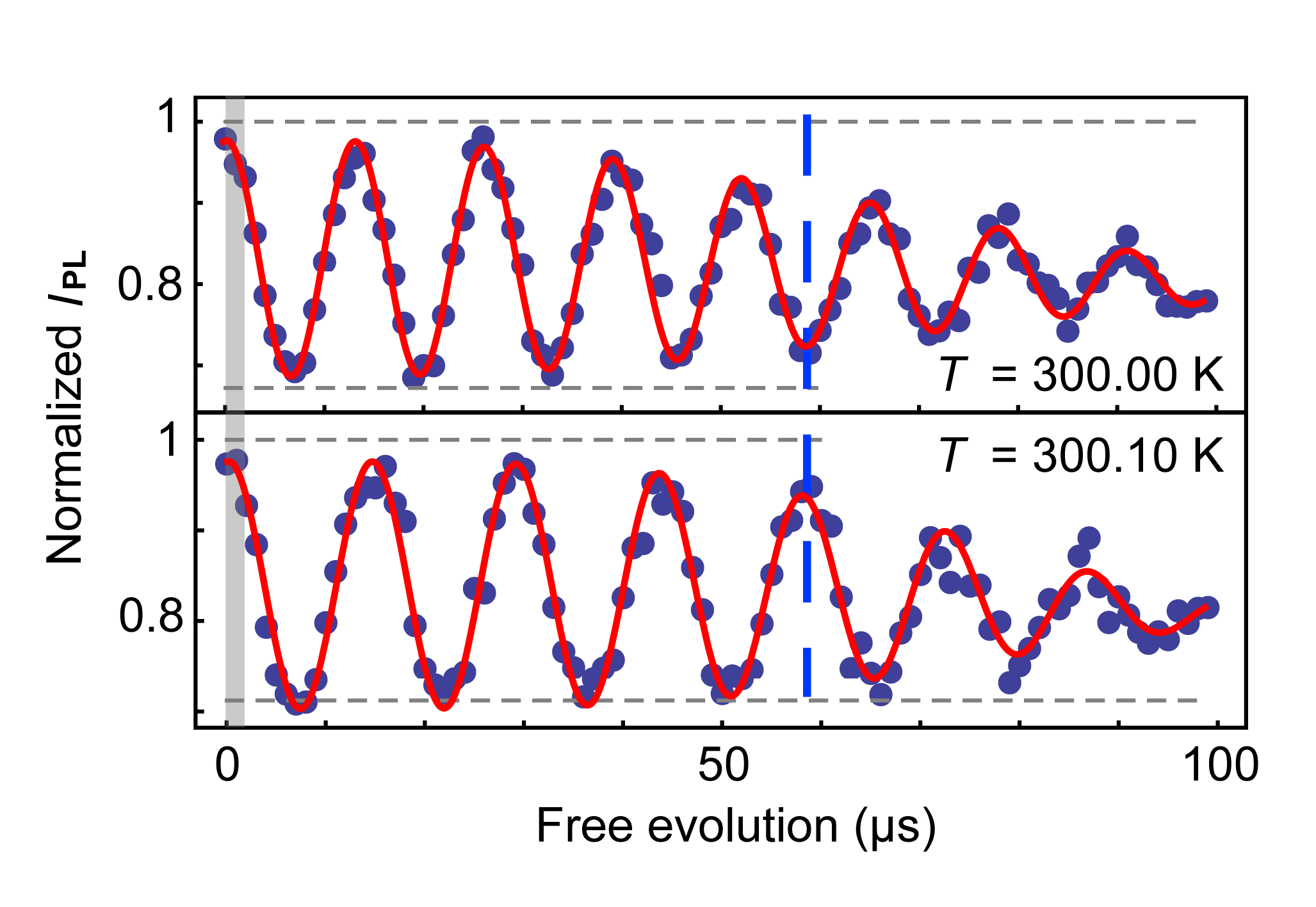 Figure 1 : (top panel) Measurement of a single NV center's photoluminescence intensity (IPL) as a function of the spin's free evolution time during a pulsed electron spin resonance measurement designed to detect thermally-driven shifts in the NV center's spin resonance frequencies. The oscillations in the IPL signal correspond to the frequency difference between the NV center's temperature-dependent crystal field splitting and the carrier frequency of the microwave signal used to manipulate the spin. The solid red line is a best fit to the data. The width of the shaded gray region represents the inhomogeneous spin lifetime, corresponding to the coherence accessible to conventional NV center DC sensing schemes. The dashed gray lines correspond to the luminescence levels of the NV center's spin states as determined by independent measurements. The measurement was performed at 300.00 K in a small magnetic field (B ~ 0.5 Gauss). (bottom panel) The same measurement as in the top panel, but with the sample temperature at 300.10 K. The thermally-driven shift in the NV center's spin resonance frequencies results in a pronounced difference in the oscillation frequency producing large IPL differences at long times. The dashed blue line draws attention to when the two signals have opposite phase. From the data we infer the NV center's thermal sensitivity (η) is 25 ± 2 mK Hz-1/2 for these experimental conditions; we estimate that enhanced photon collection efficiencies could improve η to ~7 mK Hz-1/2.

Figure 2: A similar measurement to those presented in Figure 1 performed at 500.00 K. From the data we infer an η of 39 ± 6 mK Hz-1/2 for this measurement. We project that enhanced photon collection efficiencies would improve η to ~11 mK Hz-1/2.