Manipulating quantum information effectively is a daunting task – it requires preserving the information as perfectly as possible from a noisy environment, while also maintaining the means to perform finely-tuned operations on the quantum bits (qubits) of information. The typical control methods may include applying electrical, microwave, or optical fields to the qubit(s) in question, sometimes with nanosecond precision. Small miscalibrations or fluctuations in the amplitude, frequency, or timing of the controls can destroy qubit information and render moot all the effort of isolating it from the environment.

Researchers have sought after means of control that are more robust to noise and experimental errors. One of these methods, designated “holonomic quantum computing,” involves controlling the qubit through geometric (as opposed to dynamic) operations. We demonstrate that a complete set of single-qubit holonomic gates can be performed on the nitrogen-vacancy center in diamond using just a single pulse of optical control. Furthermore, these holonomic gates are usually done in a slow adiabatic regime, but we are able to employ fast pulse shaping to do fast non-adiabatic operations.

Geometric phase, sometimes called Pancharatnam-Berry phase, is a phase difference that is acquired over the course of a system’s evolution through a complete cycle in parameter space. Simple examples of classical geometric phase can be found: a vector at the north pole of a sphere that undergoes parallel transport to the equator, then follows the equator for a quarter rotation, and finally moves back to the pole will acquire a 90-degree relative phase as a result of the path it follows (figure below, top left). In this example, a cycle was made in the two angular coordinates that define the sphere. Likewise, a quantum geometric phase can accumulate between two qubit states due to a cycle of the system within a parameter space – for example, the Bloch sphere. An important characteristic of geometric phase is that the degree of phase acquired depends only on the area enclosed by the path of the cycle, not by dynamic factors such as the duration of the cycle or the contours of the path. This feature is what motivated research to explore their potential for error-resistant forms of quantum computing. 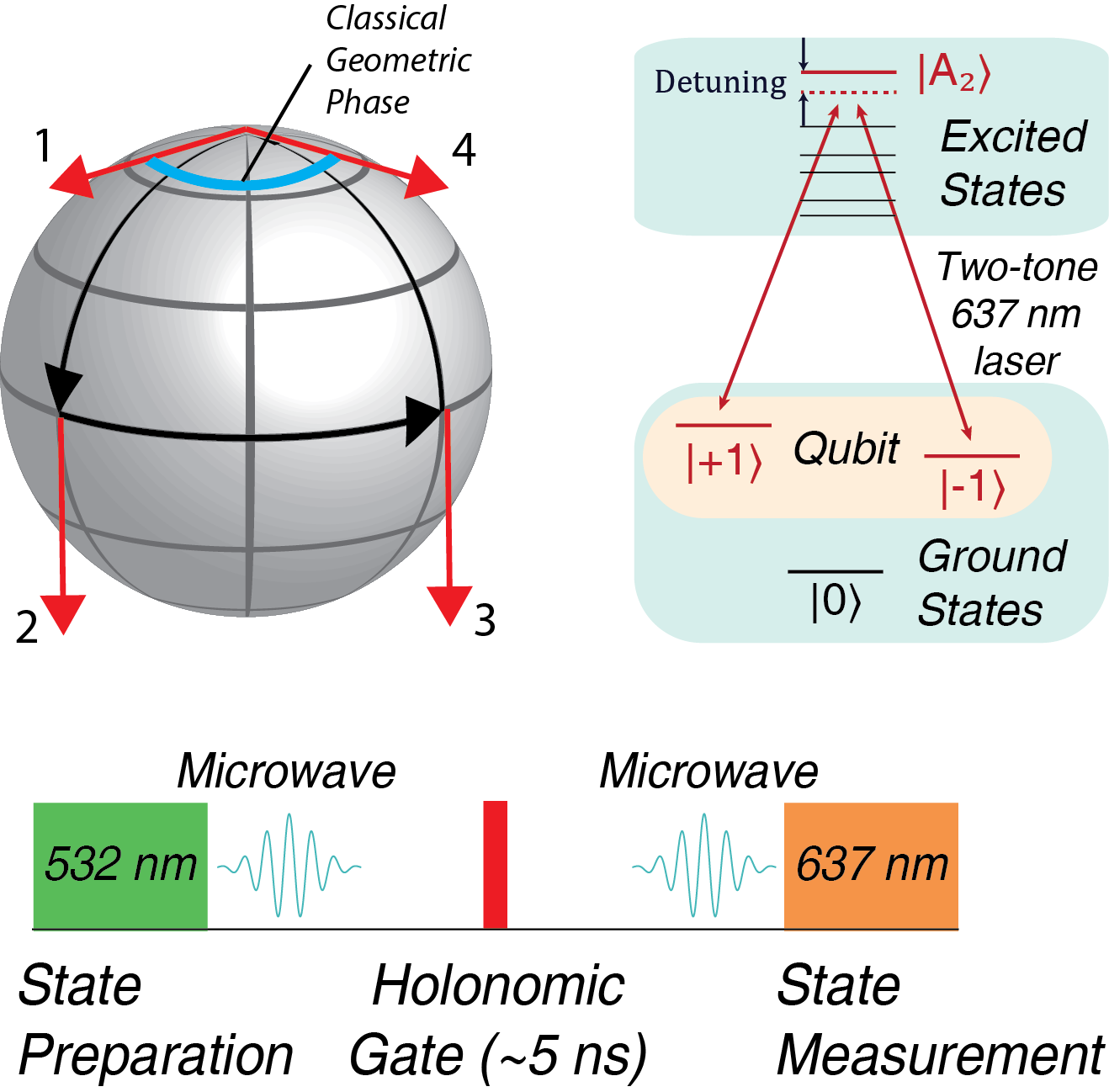 Holonomic quantum gates are the generalization of quantum geometric phases to non-commuting operations. Whereas geometric phases are equivalent to rotating the Bloch sphere around its vertical axis, holonomic gates include rotations in any direction, which correspond to the complete set of gates on a single qubit. By performing the geometric parameter loop with a larger set of states, a matrix operation – i.e., a qubit gate – can be implemented on a subset of the states involved. In our work, we use a resonant or slightly detuned laser to drive a holonomic cycle between three states of the nitrogen-vacancy (NV) center in diamond, which performs a gate on the qubit subset (figure above, top right, states in red).

Our experimental protocol involves initializing a state with a green laser and microwaves, applying a holonomic gate with a nanosecond-scale pulse of red laser light, and lastly measuring the state to determine the quality of the operation (figure above, right). By changing the relative amplitude, phase, and detuning of the two optical transitions we drive in the holonomic gate, we can perform any desired gate operation on the qubit states in just one laser pulse. Two of the most important sets of gates are rotations around the Z axis of the qubit Bloch sphere (Z gates; below, upper) and rotations around an axis on the equator (X or Y gates; below, lower). 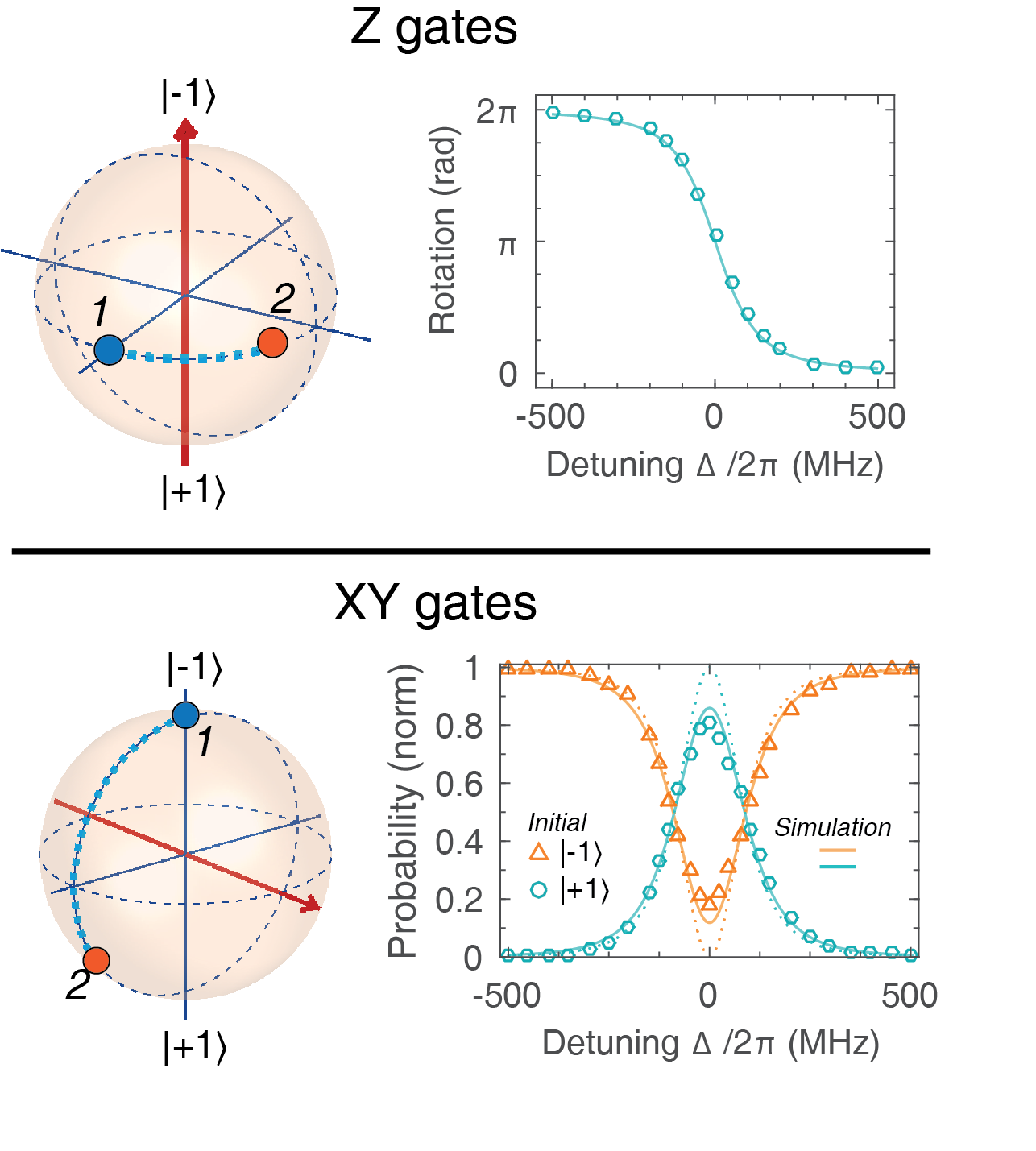 After setting the axis of rotation, we demonstrate that our control of the detuning of the red laser determines the angle of the rotation. The figure above shows how we can select either Z or XY gates with arbitrary rotation by changing the detuning. For X and Y gates, the rotation manifests itself as a transfer from the initial state: zero rotation maintains the initial state, a half-rotation fully transfers the state, and a full rotation brings it back to the initial state, resulting in the state probability curve seen in the figure above, lower right panel. Resonant errors reduce the efficacy of a half-rotation, but we are able to fully understand these effects, as shown by the close match to simulation.

In addition to the Z and XY gates above, we tested gates with rotations around any desired axis on the Bloch sphere, encompassing a complete set of single-qubit gates. Previous research also accomplished arbitrary single-qubit gates by chaining multiple resonant holonomic gates together. However, our detuned holonomic gates feature much less decoherence, resulting in higher gate fidelities. The figure above shows how the fidelity of a Z gate changes with detuning. Not only would chaining resonant gates multiply the errors of each gate, but even a single resonant gate has lower fidelity than a detuned gate. Thus, while the holonomic quantum computing paradigm is resistant to experimental control errors, the fast non-adiabatic operation and advantageous detuning approach ensure that decoherence has minimal opportunity to affect the gates. These favorable attributes are valuable in the quest for fault-tolerant quantum computing.

Additional coverage can be found here.

These findings were reported in Physical Review Letters: