A paramagnetic defect found in diamond known as the nitrogen-vacancy (NV) center has generated tremendous interest in the fields of quantum information science and nanoscale sensing in recent years. While most individually-addressable quantum systems must operate at rather restrictive temperatures of a few degrees above absolute zero, the NV center’s spin is unique in that it can be measured and controlled at room temperature. These functionalities result from the spin’s relatively weak interactions with phonons and other impurity spins as well as spin-dependent orbital transitions that enable the spin to be initialized and read out using light. There are many exciting prospects for using the coherence of the quantum spin states for ultra-sensitive, nanoscale magnetometry, for example in the detection of single molecules. However, despite strong interest in the NV center due to its robust temperature-dependence, the ultimate thermal limits to its measurement and control have been unknown. This work provides a definitive study on this topic; we demonstrate optical measurement and coherent control of single spins at temperatures exceeding 600 K and show that the spin’s addressability is eventually limited by quenching of the optical readout. These measurements, in combination with computational studies, provide important information about the electron structure responsible for the NV center’s optical spin readout, in particular demonstrating that there is a large energy difference (~0.8 eV) between the relevant electronic states. This surprising result is in contrast to previous theoretical expectations and will aid efforts to identify other defect spins in wide bandgap semiconductors with similar functionality.

Additionally, these studies show that the persistence of the NV center’s spin coherence at high temperatures and the strong temperature dependence of its spin resonance frequencies make it a promising candidate for nanoscale thermosensing, with sensitivities better than 100 mK Hz-1/2 up to 600 K. These sensitivities are significantly better than those offered by other luminescent nanostructures utilized, for example, in noninvasive temperature measurement of biological systems. Together with diamond’s ideal thermal and mechanical properties, these results suggest that NV center thermometers could find application in a variety of contexts such as cellular thermometry and scanning thermal microscopy. 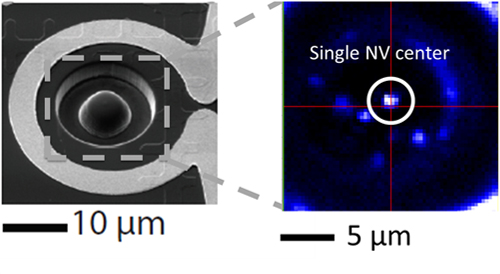 FIGURE 1: (left) Scanning electron microscope image of a solid immersion lens (SIL) etched around a single NV center in diamond. The SIL enhances the photon extraction from the high-index diamond substrate and is necessary for studying NV center dynamics as its fluorescence quenches at high temperatures. A platinum ring antenna used for GHz-frequency electron spin resonance experiments is also visible. (right) A spatial photoluminescence of the SIL showing a single NV center (circled in white) at its center. 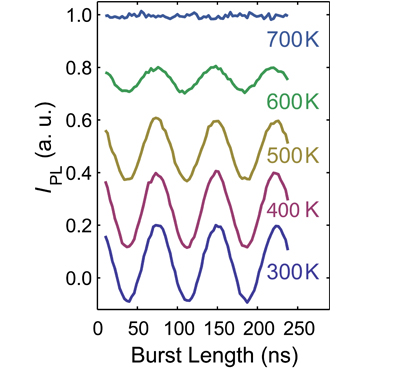 FIGURE 2: Coherent spin rotations (Rabi oscillations) of a single NV center performed at varying temperatures. The overall amplitude of the Rabi oscillations decreases rapidly above 550 K due to thermally-driven quenching of the defect’s optical spin readout.