Since being proposed a half-century ago, quantum computing has been confined to science fiction and the daydreams of physicists.

Then that all changed.

“In the last decade, the field of quantum information science has rapidly expanded beyond fundamental research toward real-world applications,” said Prof. David Awschalom of the Institute for Molecular Engineering at the University of Chicago.

Behind the scenes, a number of breakthroughs have made it possible for scientists to encode and manipulate information in quantum systems, which behave according to the strange laws of quantum mechanics. Today, university scientists like those at the PME are fleshing out the fundamental rules of controlling such systems, while Google, IBM, Microsoft and Intel are pouring millions of dollars in a race to build those concepts into working computers.

Quantum computers should be able to solve certain problems much faster than current computers. Because they naturally process multiple possibilities in parallel, it’s thought they could speed up searches for new pharmaceuticals, improve batteries and find greener ways to make chemicals. (They’re also of significant interest to governments because such computers might be able to factor the large numbers that currently encrypt the world’s financial, political and military secrets.)

But computing isn’t the only way to tap quantum quirks. Scientists at UChicago are shaping a vast new field made possible by our growing ability to manipulate quantum systems. In fact, of the major quantum technologies, researchers see computers as the furthest out to achieve. Before then, there are possibilities for innately secure communication and precise navigation systems. Quantum sensors might find hidden underground oil pockets, improve earthquake monitoring, unravel the structure of single molecules or peek at the busy dance of proteins inside a cell.

“The Institute for Molecular Engineering is looking 10 or 15 years down the line,” said Matthew Tirrell, the founding Pritzker Director and dean of the Institute for Molecular Engineering. “While Google and Intel are working to build prototype systems, we need to lay down a scientific foundation of understanding for these quantum technologies, and to do that, we are building an institute that brings together experts with deep knowledge in a variety of adjacent fields.”

The right ingredients for discovery

The PME is uniquely positioned to tackle the science from which quantum technologies will emerge. In addition to its state-of-the-art Pritzker Nanofabrication Facility, the institute works closely with UChicago’s two affiliated national laboratories, Argonne National Laboratory and Fermilab; in fact, last year, the PME formed a hub called the Chicago Quantum Exchange to coordinate research among the three institutions. The institute is also tied with UChicago’s Polsky Center for Entrepreneurship and Innovation to commercialize breakthroughs.

The institute is set up to solve problems that span multiple scientific fields—encouraging researchers to leverage the wide range of expertise around them, which is key to quickly realizing the full potential of discoveries made in the lab.

"You need to lay down a scientific foundation of understanding for these quantum technologies, and to do that, you need a center that combines really deep knowledge in a variety of fields."

—Matt Tirrell, the founding Pritzker Director and dean of the Institute for Molecular Engineering

For example: A few years ago, Awschalom’s research group discovered quantum behavior in a common material called silicon carbide. No one had expected to see it there; and no one could explain why it was happening. So they reached out to fellow researchers, including Giulia Galli, the Liew Family Professor of Electronic Structure and Simulations at the Institute for Molecular Engineering.

“We met with Giulia, who is a theoretical physicist. Within a few months, she and her students came up with some clever modeling to explain the underlying behavior we observed,” Awschalom said. “Now we are collaborating with Andrew Cleland next door to start incorporating these quantum states into hybrid devices. There are now hundreds of potential ways to develop these materials into useful systems.”

The result of all this is research that can more quickly spin up to become part of our lives. “Ultimately, we think quantum technologies will impact the world in many ways beyond computing,” said Awschalom. 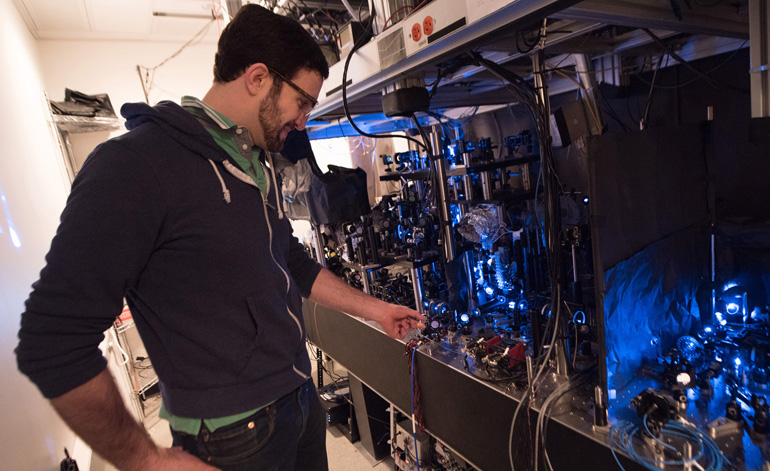 Leave your intuition at the door

Quantum mechanics is how scientists describe the behavior of fundamental particles. The theory was built over the 20th century, and some of its central tenets were proposed by Einstein, though he was famously uneasy about their implications. Physicists originally began to test these theories by observing the behavior of particles, such as photons of light, which act both as waves and as particles. Pull on that thread, and you discover a universe that does not square with the world as we’re used to.

“It’s very hard to develop a good intuition for quantum behavior,” Awschalom said, “because everything behaves so differently from the classical world we know.”

According to quantum mechanics, objects can occupy different locations at the same time; they can go through walls; and they can be entangled with one another, acting as though they “know” what’s happening miles or even light-years away. And if you measure a quantum state, it can change. So scientists have to build systems that create, manipulate and move these particles, while studiously avoiding interacting with them more than strictly necessary.

The property that sparked the idea for quantum computers is that particles can exist in two positions at the same time, a concept called “superposition.” You might be familiar with the binary language that underwrites all of today’s computers, which contains just two options: 0 and 1. A quantum computer could expand that language by encoding information that exists in more than one state at a time, which lets you attack questions very differently. Since nature behaves quantum-mechanically, at a certain point, we need a quantum computer to simulate those processes. Along with completely new computers comes a need for new algorithms: across the street from the PME, a $10 million NSF project headed by Fred Chong, the Seymour Goodman Professor in the Department of Computer Science, will design hardware and software to help realize the potential of quantum computing more rapidly. 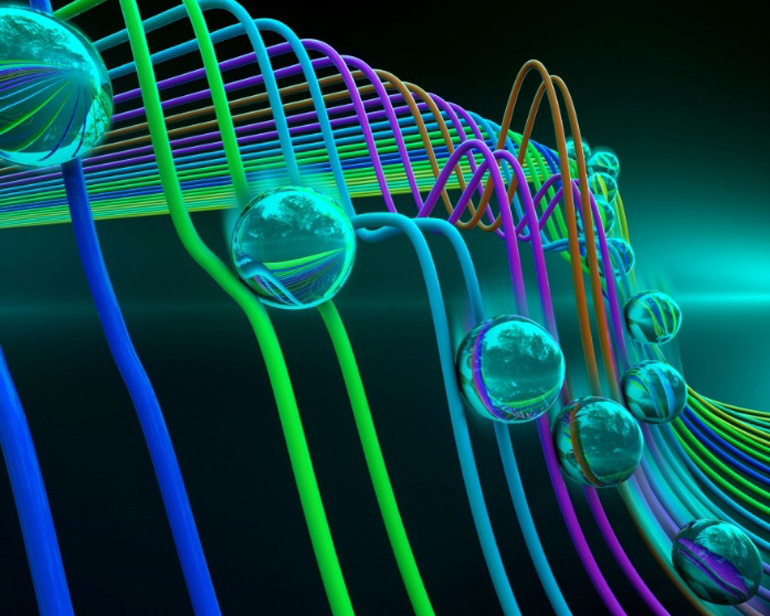 PME scientists invented a configuration that can flip the state of a quantum bit, from ‘off’ to ‘on,’ 300 percent faster than conventional methods. (Artist’s rendition by Peter Allen)

There are already some small systems of about five quantum bits (called qubits) that anyone can play with online. Within the year, some of the largest tech companies are expected to unveil working systems with 50 or more qubits.

“Every time you add a qubit, you double the computer’s power, which gets you enormous power very quickly,” said Andrew Cleland, the John A. MacLean Sr. Professor for Molecular Engineering Innovation and Enterprise. “But it’s very hard to keep them all behaving the way you want.”

Quantum systems are extremely sensitive. They get thrown out of alignment by the tiniest changes in temperature or magnetism, noise or someone walking by. “A major challenge in this field is to preserve the integrity of quantum signals in real-world devices,” Awschalom said.

“Our really good systems now last for tens of microseconds,” said Asst. Prof. David Schuster. “But you can do a lot in that time.” 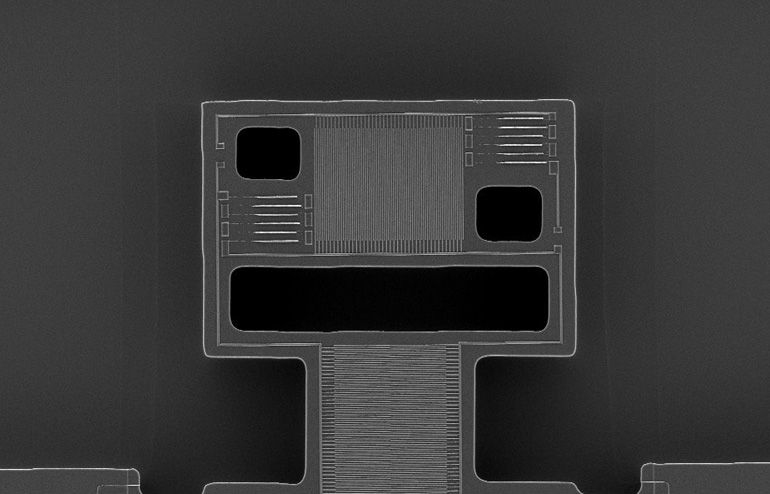 A quantum device known as the "0-Pi" circuit, the first of a new class of protected superconducting qubits being developed at the University of Chicago in the lab of Prof. David Schuster. (Courtesy of Nate Earnest and Abigail Shearrow)

But quantum’s quirks are what make it interesting. While not being able to read your information without screwing everything up is frustrating, it makes it perfect for designing a hack-proof communication system: If someone eavesdrops, the information will be destroyed.

Similarly, quantum systems’ tendency to respond to the least disturbances make them perfect sensors. “With quantum sensors, you are dealing with the absolute smallest amounts of energy, so you can sense things that other technologies cannot,” Cleland said.

They could detect something as small as tiny shifts in gravity that indicate the ground is denser in one area than another—which could detect untapped pockets of oil or minerals or get us closer to predicting earthquakes. They could even potentially detect dark matter.

Medicine is interested, too. Untangling the structure of proteins and cellular structures is central to making better pharmaceuticals, and it’s thought that quantum sensors could do this much faster and with better sensitivity. It could even one day peer inside the workings of our own cells. “Think of the possibilities for advancing biology and medicine if we can place nano-scale quantum sensors into living cells and observe their behavior in real time,” Awschalom said.

“In the last decade, the field of quantum information science has rapidly expanded beyond fundamental research toward real-world applications.”

Yet the applications will only come once scientists understand the underlying principles of how to properly control quantum systems. First they need to understand how to prevent magnetic fields from knocking such systems out quickly; how to make bigger systems hold together; and how to interface them with existing technology.

“These are important questions for university scientists and engineers, because this underlying physics will ultimately determine the limits of quantum technologies,” Awschalom said. “To answer these questions, we  need groups of computer scientists, engineers and physicists working together.”

And as that science grows into full-fledged technology, the world will need a new generation of quantum engineers, Awschalom said. Another $1.5 million from NSF will fund an innovative program, headed by Awschalom and Harvard’s Evelyn Hu, that pairs graduate students to tackle specific problems along with mentors from both academia and industry.

The field is exciting to work in, PME researchers said, especially for scientists who’ve seen the field evolving before their eyes. “When I was in grad school, this was all pretty pictures in textbooks, that you knew you couldn’t apply to anything in the real world,” Cleland said. “But the barriers started falling away, and now we’re not only actually doing those textbook examples, but going well beyond them.”