Your body keeps its neurons firing, immune system working and serotonin flowing with a clever bit of engineering: tiny capsules that deliver signaling molecules from place to place in the body.

A team including University of Chicago engineer Juan de Pablo announced last week in Nature Chemistry that they have created a recipe to mimic these capsules. Their tiny, resealable synthetic packets, like Ziploc bags, release their contents on cue—in this case, when exposed to light of a particular wavelength. Such technology could be useful for medicine or other applications, scientists said.

"One could imagine making these to custom-deliver medicine to specific parts of the body, or to release fertilizer or cleanup chemicals in the soil, for example," said de Pablo, the Liew Family Professor at the University of Chicago's Institute for Molecular Engineering.

The team, which also included researchers from the University of Massachusetts, designed a hollow synthetic packet that is just tens to hundreds of nanometers across—so tiny that thousands could sit side by side in the period at the end of this sentence. Its skin is made up of a double layer of two long molecules called polymers: The outer rind is water-soluble, while the inner layer is a glassy material that forms a rigid wall. The two polymers are linked by a single molecule that responds to light by changing its shape.

When researchers shine light on the packet, the linking molecules change shape, softening the glassy material that sits below and allowing the contents of the packet to slip out. Once the light turns off, the glass solidifies again and the packet is resealed. 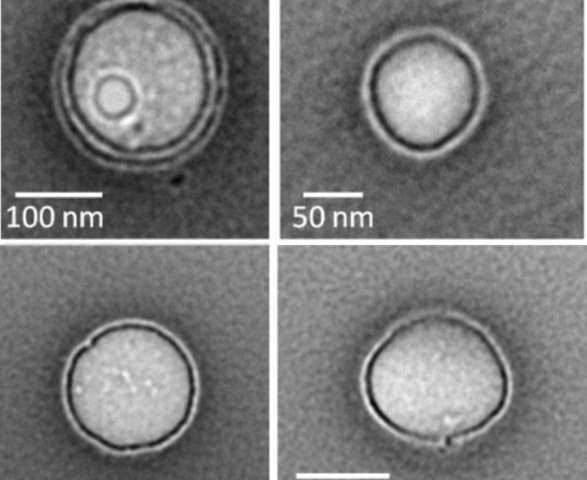 A transmission electron microscope image of the packets; both layers of the skin are visible. For comparison, one nanometer is about how much your fingernails grow in one second.
Credit: Poornima Rangadurai

The researchers imagine applications such as targeted medical treatments: Fill the packets with medicine, wait until they're circulating in the body, then shine a light on the specific part of the body and watch the packets release the medicine.

Both parts of the molecule are biocompatible and already used in implants and medical treatments: The outside is polyethylene oxide, a polymer used in cosmetics, toothpaste and medications today; and the interior lining is polylactic acid, which can be derived from corn starch and degrades to lactic acid, a natural compound in the body.

The collaboration is expanding to explore more molecules that could be designed to react to different triggers, such as light, pressure or chemical cues, which could expand the range of potential uses.

"The surprise was this insight that a single light-sensitive layer, measuring less than one nanometer but lying on top of otherwise very long molecules tightly packed onto a thick glass, can create a perturbation in the entire material," de Pablo said.

A deeper understanding of such mechanisms could provide the foundations for more new materials with useful properties. De Pablo and his collaborators are using sophisticated molecular simulations to decipher those mechanisms, he said.

Get to know us